A selection of poems by Sir Walter Raleigh 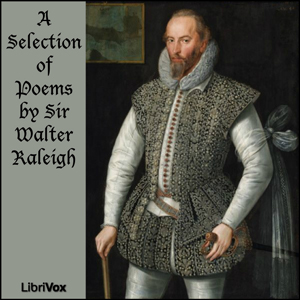 audio
A selection of poems by Sir Walter Raleigh

LibriVox recording of A selection of poems by Sir Walter Raleigh. Read by Algy Pug.

Raleigh's poetry is written in the relatively straightforward, unornamented mode known as the plain style. C. S. Lewis considered Raleigh one of the era's "silver poets", a group of writers who resisted the Italian Renaissance influence of dense classical reference and elaborate poetic devices.

In poems such as "What is Our Life" and "The Lie", Raleigh expresses a contemptus mundi (contempt of the world) attitude more characteristic of the Middle Ages than of the dawning era of humanistic optimism. But, his lesser-known long poem "The Ocean to Cynthia" combines this vein with the more elaborate conceits associated with his contemporaries Edmund Spenser and John Donne, expressing a melancholy sense of history.

Poems in this collection:
Epitaph
The Nymph’s Reply to the Shepherd The Lie
The Passionate Man’s Pilgrimage
Life
A Farewell to False Love
Praised be Diana’s Fair and Harmless Light
Farewell to the Court
To her Love when He had obtained Her
Nature that Washed Her Hands in Milk
A Vision upon this Conceit of the Fairy Queen
On the Cards and Dice
The Silent Lover
As You Came from the Holy Land
The Excuse
A Description of Love
An Epitaph Upon the Right Honorable Sir Philip Sidney, Knight, Lord Governor of Flushing
Another of the Same (the Faerie Queene)
The Ocean to Cynthia (fragment)
A Farewell to the Vanities of the World

Uploaded by librivoxbooks on January 3, 2011